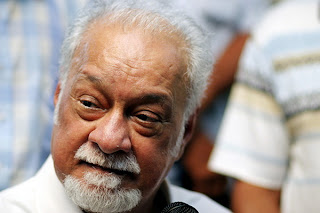 Sixty years ago - when British failed to take over the Tanah Melayu Peninsular and when our country was given the name of Persekutuan Tanah Melayu - who would have ever thought that it might be finally taken over by migrants who came to Tanah Melayu.

When Raffles took his first step to this strategic island, it was ruled by a king which was known as the sultan, complete with palace, ministers and his officers. But due to greed from British political officers, Sultan Husain Shah had to move to Melaka and he died there.

After the first World War, when UMNO was leading the fight for Independence, this island features strong UMNO parties and a few other Malay organizations. Utusan Melayu newspaper was the strongest voice in fighting for the Malays, also in the same island.

Back then, the Malays in this island were highly respected. Writers, journalists and artists from Peninsular began to move to this island - in search for a new life. Keris Mas, Usman Awang, Asraf, Wijaya Mala, Abdullah Hussain, Jamil Sulung, P.Ramlee and Romai Noor fell for Singaporean girls. That is Singapore, our pride in that era - not Kuala Lumpur.

Now, Singapore UMNO has been dead for a very long time and it is no longer in Singapore's modern history list. Malays that live in Singapore became a minority group that hopes for pity from its leaders.

In 20 years time, people will begin to forget that the island did have a Malay government (even now those who are my age would know such thing). Even Malay younger generations who are left behind would not even care about their race. All they know is, they are Singaporeans.

It is proven now that history has turned to reality where the Sultan with his institution and his race who were respected could simply lose his status within 60 years. Sang Nila Utama and Temasik has now turned to an old folklore.

Administration power has now turned to the hands of migrants. That is how a non-Malay country thrive in a Malay region.

When Karpal Singh announced openly:"As long as I live, I will fight for a non-Malay to be the Prime Minister," Malay scholars said that it is an impossible mission and it will never get there.

Karpal is said to be daydreaming and that he do not know anything about history. This DAP Chairman is said that he had fail to understand the country's Constitution and the status and the power of Royal Institution, especially Yang di-Pertuan Agong.

Karpal knew that he will be attacked with various charges. That is his intention - to lure the enemy. Trying to pick a fight with the Malays but he would remain out of the ring. Then, another political issue derives prior to the General Election.

Even if it did not show on his face, Karpal should be smiling inside, looking at how Malay scholars and leaders working hard to defend themselves, leaving their real responsibilities behind. This famous lawyer is happy to see how PAS is in chaos and that UMNO is fighting with PAS! They have fallen into his trap. His target, Malays!

A few years ago, Karpal did make an oath saying that if PAS tries to build an Islamic nation, they would have to go over his dead body, This political provocation had raised negative reactions from Malays outside of UMNO in attacking PAS because after such statement, they are still working alongside DAP. So, PAS decided not to continue with their fight in building an Islamic nation.

This time, Karpal once again tries to challenge PAS's political stand and the strength of Malay politics. And it is obvious that PAS is in chaos. Both of its leaders are lost in searching for answers.

PAS President, Datuk Abdul Hadi Awang said,"That is Karpal's personal opinion. PAS would follow Pakatan Rakyat's resolution which has been approved by all of its parties." This is the answer from a politician. They do not want to be trapped. What can't he say,"PAS still wants a Malay Prime Minister"?

When Malay leaders do not have the guts to defend themselves just because they are scared to face political risks, it is not impossible for Malaysia to have a non-Malay Prime Minister in the future. Fear was one of the reason why we lost Singapore.

Datuk Nik Abdul Aziz Nik Mat's early response sounded as if he did not want to make any statement. He only said,"Karpal Singh is an old man." It meant that things that are said by ild men cannot be taken seriously because they are getting senile. Probably Nik Aziz fail to realize he is old as well.

Then, he made another statement saying,"We can have a non-Malay Prime Minister, as long as he is a Muslim. How can you lead an Islamic nation is you're a non-Muslim. Islamic state should be ruled by a Muslim. So, race should not be an issue." For Nik Aziz, Islam is a must, Malays do not really count.

The President of Economic Bureau of the Malay Consultative Council, Tan Sri Dr. Kamal Salih said,"As long as the status of Yang di-Pertuan Agong stays as the leader of the country and Malay Kings are in throne, Malay rights, Malay language and Islam would remain as part of the Constitution, including the condition where the Prime Minister should be among Malays."

The question is, what if those things which Dr. Kamal had mentioned is no longer there? What if the Constitution is amended, power and status of the Royal Institution is changed? (I remembered how their status were during British invasion when they signed the Malayan Union Agreement.

Such change is not impossible. In a democratic system, the power falls to the hand of voters and the party which is given the power rules.

The president of Pertubuhan Pemikir Profesional Melayu, Prof. Datuk Dr. Kamaruddin Kachar said, As a leader, he (Karpal Singh) should realize that this land have been used by Malays since 4,000 years ago with its own Malay Kings and majority Malay citizens with the percentage of 67%."

The question here is, would it be enough for us to face the political game now by just saying that the Malays haven been in this country for 4,000 years?

I think, history do not bring any influence for us and our generation. The 67 percent might change (for example, Penang, within two years. 18,000 decided to move away from the state).

Numbers do not make any difference, the important thing is that how many political areas that still has a majority of Malays.

In this era, obviously Karpal's ambition might not become a reality. MCA's President, Datuk Seri Dr. Chua Soi Lek is convinced, "Having a Chinese PM is not possible at this moment." He stressed,"DAP members cannot be the PM even if they gain power now."

But what about our future - 10 or 15 years from now? probably another two or three GEs from now, Karpal's hope might turn to reality.

If Malay's younger generation do not care about what Karpal have said, the power and status of Malay Kings and the whole race might just crumble - just like what had happened to Singapore.

Karpal Singh's voice is not a personal opinion. Even if he is dead, do remember, his voice will never die!