Malaysia Should Learn from UK Riots 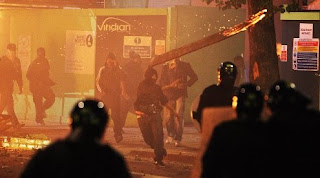 The act of violence and anarchy are rarely mindless. Chaos and causing damage on properties and all other escalating crimes that pose a danger to public safety, there’s politics behind these menacing acts.

A single gunshot – Duggan’s killing – led to riots across Britain signaling the call to put an end to its advanced bourgeois democracy. The British government was baffled by the raging outbursts by teenagers which have impacted heavily on the country’s political map. The chaos was brought over to the courts in London, Manchester and Birmingham where they had to work through the night to process the alleged looters and vandals. Police in London had raided houses to round up rioting suspects. (Quoted from AP, “London police raiding houses over UK riots”) About 1,200 people have been arrested. Most of them are youths from low-income families.

David Lammy, MP for Tottenham, called the vandals “mindless, mindless people”. Nick Clegg denounced it as “needless, opportunistic theft and violence”. Meanwhile, Prime Minister David Cameron, speaking from his Tuscan holiday villa, declared simply that the social unrest searing through the poorest boroughs in the country was “utterly unacceptable”. Cameron said criminal street gangs were at the heart of the violence.

“Territorial, hierarchical and incredibly violent, they are mostly composed of young boys, mainly from dysfunctional homes,” he added.

Cameron’s statements were madly insufficient. It is no way to talk about viral civil unrests. Angry young people with nothing to do and little to lose are turning on their own communities, and they cannot be stopped, and they know it. The words “Anarchy in UK” and “London’s Burning”, both titles of famous hits by London’s two legendary punk bands, were splashed across the headlines of media across the world. Who would have known these two songs from the 70s by Sex Pistols and The Clash, respectively, would come to life more than 30 years later. Read More...
Posted by Unknown at 1:06 AM