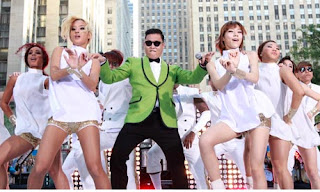 SEOUL: Psy's "Gangnam Style" video was galloping towards the one-billion-view mark on YouTube Friday, a fresh milestone in the enduring global craze for the South Korean rapper and his horse-riding dance.

As of 0600 GMT, the view counter attached to "Gangnam Style," which was only posted on the video-sharing site in mid-July, stood at 995.8 million and counting.

Psy has swept all before him in the past five months, hoovering up awards and scoring guest appearances with everyone from Madonna to the head of the United Nations.

The video and its singer have been given walk-on roles in major world events like the US presidential election and major maybe-events like the Mayan calendar-inspired speculation about looming global armageddon.

The timing of the one-billion views breakthrough looks set to dovetail with a viral social network hoax that had the 16th century French seer Nostradamus apparently referencing Psy as a harbinger of the December 21 apocalypse.

And it comes less than a month after the video took the all-time "most-viewed" title away from "Baby" by Canadian heartthrob Justin Bieber.

Bieber's effort was still in second place Friday with more than 812 million views.

Although its imminent demise has been predicted many times, the Psy phenomenon has simply refused to die.

Every time it has looked like fading, another parody, another celebrity or even another world leader has popped up to administer some publicity CPR and restore it to health.

Rolling Stone put "Gangnam Style" at number 25 on its top 50 list of best songs for 2012 and labelled Psy as "Seoul Brother Number One."

On the Billboard Hot 100 chart it peaked at number two.

The song - which refers to a trendy Seoul district - has spawned a mini tribute video industry and has been co-opted by an impressive roster of big names, including Chinese dissident artist Ai Weiwei.

It earned Psy a contract with Bieber's management agency and a number of assessments and projections have been posted claiming "Gangnam Style" has generated over $8.1 million in advertising deals.

And the public has joined in, with tens of thousands turning out for giant flashmob performances of Psy's horse-riding dance in cities like Paris and Rome - even beauty spots like South America's majestic Iguazu waterfalls.

The quirky star, whose real name is Park Jae-Sang, has won adulation in his homeland for the global hit and was this month awarded one of South Korea's highest cultural honours, the Okgwan Order of Cultural Merit.

Psy hit a speedbump in the United States when anti-American views he voiced a decade ago caught up with him last month - but he apologised and went on to perform at a "Christmas in Washington" gala attended by Obama and his family.

The government has spent substantial time and money supporting the so-called Hallyu (Korean Wave) of TV shows and pop music that has swept across Asia in the past decade.-AFP
Posted by Unknown at 4:53 PM