Malays Can Be Bought With Money, Positions - DAP 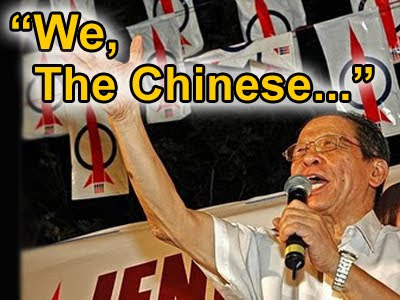 Chinese racist party, DAP had insulted Malays as they thought that the race can be bought with money and position.

This is proven when they tried to get their former Vice President, Tunku Aziz Tunku Ibrahim, to remain in the party.

He was offered a high position in Penang Institute with pay and allowance that goes around RM50,000 per month and oversea holidays.

That is how cheap DAP thinks the Malays are that they thought that such dignified Malay leaders such as Tunku Aziz can be bought with money and position.

If this is how DAP looks as leaders such as Tunku Aziz, what do they think of Malays overall?

just imagine what would happen if DAP rules this country along with their mules, PKR and PAS.

Obviously, such low level of respect on Malays, they might just destroy Malay institutions that upholds the Malays.

Few of these institutions include MARA that had been increasing Malay;s socio-economy since the Independence especially in the education and the economic sector.

Institutions such as Maktab Sains MARA where they provided free and high quality education to hundreds of thousands of Malay children.

Even high-education institutions such as UiTM, would be totally opened to non-Malay students of DAP is in power. Even though PAS is a party with the majority of Malays while PKR is a party for all, they can never really do anything because DAP has the total power and they have the final words in every single decision.

PAS and PKR are only mules while seeing DAP destroys every single Malay institution in front of their own eyes.

Just for the sake of power, PAS and PKR will let DAP rule as they wish. The evidence, Pakatan Rakyat's administration in Selangor.

When issues such as a Muslim being converted to Christian in Selangor, PAS did nothing to DAP. PAS even fired Selangor Exco, Datuk Hassan Ali for defending Islam.

Just for the sake of catering to DAPm PAS would even put religion aside. Secondly, social problems are at a hike in Selangor under Pakatan Rakyat with the expand of night clibs and illegal gambling premises.

This is all because of DAP because they let Chinese gangsters rule Selangor without making any legal actions against them.

Criminals are protected in Selangor because DAP allow that while PKR and PAS did nothing. Whatever it is DAP has up its sleeve to lure Malays. they will forever be seen as a racist anti-Malay party.

Since it was established, DAP has never fought for Malay rights, UMNO was the only party that works hard to ensure that Malays stay as the host of this country.
Posted by Unknown at 11:08 PM

Email ThisBlogThis!Share to TwitterShare to FacebookShare to Pinterest
Labels: DAP

ada pepatah jalanan - corruption happened in msia becos the chinese keeps on giving...its their cuture to get things done by bribery. and they blame the malays and umno...