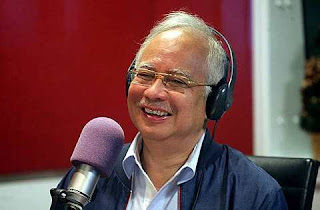 Well, the prime minister today bared all to Malaysians, what made him tick, revealing interesting personal bits about his life as he went about fulfilling his duties and the trust of the people.

In an early morning live radio broadcast with radio stations MIX fm, hitz.fm and Era, Najib fielded questions on, among others, how he coped with his job, kept in shape, managed his time, his use of the new media and his favourite music.

"I do feel tired sometimes but I've to do my utmost in fulfilling the trust of the people that's bestowed on me," he said when asked how he coped with his tight schedule.

Interviewed by MIX fm Breakfast Show with JD (Jason Desmond) and Dilly (Adila Shakir), Najib said, due to his workload, it appeared that his days had become longer and nights shorter, with people streaming to see him, even at home.

Casually attired in blue t-shirt, blue slack pants and dark blue jacket, he said running a country was not unlike being a chief executive officer of a company, "except that it is slightly bigger".

Noting that he was, after all, human, Najib said he sometimes needed a bit of downtime to watch his favourite television programmes and exercise, for example.

"As long as you have balance in your lifestyle, then you won't become too stressful," he told listeners, adding that he kept in shape and maintained his vitality by exercising three to four times a week.

And, he had discovered that it was not easy for him to go out on his own since becoming Malaysia's prime minister.

"I tried to slip out once but the whole Bukit Aman (federal police headquarters) was alerted. So, I had to give up the idea," said the prime minister, adding that he had advised his security detail not to be too obtrusive

when they were guarding him.

Being a well-known leader himself, does not stop Najib from being awestruck by other distinguished personalities, especially anti-apartheid leader and former South African president Nelson Mandela.

"He is the kind of a man who's larger than life. He could be so forgiving despite the cruelty that was inflicted on him over the years. What impresses me is the strength of his character," he noted.

Amid his seriousness in administering the country, Najib showed his lighter side when he sportingly agreed to a request by hitz.fm Morning Crew programme deejays JJ (Johan Fernandez) and Ean (Tengku Ean Tengku Nasrun) to pull a prank on AMP Radio Networks general manager of programming Yaacob Bakhtiar Abdullah (Jake Abdullah) or better known as 'The Jakeman', in the channel's popular segment, 'Gotcha'.

AMP Radio Networks' network content manager Mohamed Raqeem Brian Abdullah, who connected the prank call, told The Jakeman: "I think I have the prime minister on the line and he needs to talk to you."

Najib, without introducing himself, said: "Hi, Jake, how are you? I'm calling about my son. My son wants to be a deejay and is very adept in spinning. I'm calling as a father. Maybe, you could give him a chance to make one appearance at your show."

The Jakeman, who was in disbelief that Najib was on the line, had asked to verify.

The Jakeman, who was heard saying, "Betul ke Datuk Seri ini" (Is it really you, Datuk Seri?) then asked whether Najib's son, Norashman, was interested to be a deejay and be part of the show.

"He is very keen and very passionate about it. He would love that chance to be a part of this show," said Najib.

When The Jakeman asked Najib, "What are you actually up to, Datuk Seri?," the prime minister jokingly said: "I want him to replace you because I think he does a very good job."

To The Jakeman's question on the kind of music or songs Norashman usually played, Najib said: "He can play Mandarin songs, he speaks in Mandarin, as well."