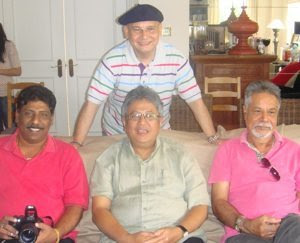 
Umno Youth chief Khairy Jamaluddin today blasted the police for alleged inaction against fugitive blogger Raja Petra Kamaruddin (RPK). The Rembau MP was questioning the sluggish performance of the police to track down RPK when information of his whereabouts is conspicuously pervasive.

"Where is the action from the police? The prime minister has said the police will be responsible for apprehending Raja Petra. The Inspector-General of Police has said he will get information on Raja Petra's location, but RPK is going around in public," he told a press conference at Parliament House here.

RPK fled the country amid a sedition charge over his controversial allegation about Prime Minister Najib Tun Razak and wife Rosmah Mansor, linking them to the murder of Mongolian Altantuya Shaaribuu.

He is currently in the United Kingdom giving speeches at events organised by Pakatan Rakyat, with the recent one being yesterday.

"Yesterday, RPK was not in hiding; he attended a Pakatan event in London," said Khairy.

He said he was surprised that the police had not tried to engage their British counterparts in the UK to extradite the controversial blogger.

"Even if they cannot arrest him there, the relationship (between Malaysian police) and Scotland Yard is there, through the extradition agreement. The British police can arrest RPK and bring him back to Malaysia.

"Are they (police) unaware, or choose not to know RPK's movements and location? You have to ask the right questions.

"I want to help the police here," added Khairy.