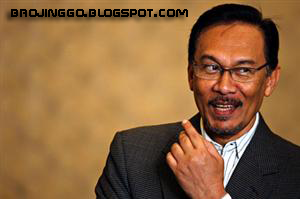 AIDCNews – Ever since High Court Judge Datuk Mohd Zabidin Mohd Diah ordered Datuk Seri Anwar Ibrahim to enter his defence on May 16, the de facto PKR leader has been going all out to avoid court appearance.

Twice the court has fixed the dates for Anwar to enter his defence, nevertheless on both occasions his defence team managed to side step the process by applying for a trial within a trial, which subsequently had enabled Anwar to avoid going to court to defend himself.

The court fixed June 6 until Jun 30, but four days before the defence dates, on June 2, Anwar applied for the judge to be dropped.

On June 6 the judge decided that he would not recuse himself as they were no reasons for him to do so. The attempt was seen as Anwar’s third in trying to get a judge off his case.

However, Judge Mohd Zabidin allowed the application by the defence to postpone the case for 37 days while waiting for a decision from the Court of Appeal.

The court fixed July 13 for proceedings to recommence.

On July 6 the Court of Appeal rejected Anwar’s appeal over the refusal of Judge Mohd Zabidin from recusing himself.

Appeals Court Judge, Datuk Hassan Lah made the decision after listening to the arguments from both the defence and the prosecution.

“We find no reason not to agree with the High Court decision on June 6,” he said.

Subsequent to the court’s rejection of the appeal, Anwar’s lawyer, Karpal Singh made another application to postpone the mention date till July 13.

The judge, however, rejected Karpal’s application.

Anwar succeeded in postponing his defence for 40 days from June 2 until July 13 with his application to recuse the judge.

On July 13 the court once again fixed from August 8 until August 26 for the de facto PKR leader to enter his defence.

However, on July 26 and August 1, 14 days before his defence was due, Anwar came up with another application to interview 15 witnesses before he would do so.

It looks like Anwar is repeating his earlier tactic on June 6 when he avoided entering his defence by making another application.

What all this points to is the August 8 date, when Anwar was supposed to enter his defence will again be postponed to allow the court to deliberate both his applications to call the 15 witnesses.

Why is Anwar so reluctant to enter his defence?

Why is he always looking for ways to wriggle from the path and seek trial postponement?

The reason could be Anwar Ibrahim does not have an alibi to defend himself.

We have to wait and see what he will do next…